‘We must build trust to end this deadlock’

Outgoing Legislative Council president Jasper Tsang Yok-sing has urged the central government and political forces in Hong Kong to break the vicious circle of Beijing’s growing assertiveness towards the city’s affairs and the resultant backlash from Hongkongers.

Tsang, who is well versed in late Communist Party leader Mao Zedong’s thoughts, said conflicts within Hong Kong society as well as those between Hongkongers and Beijing were attributable to internal factors.

“Putting the blame on external factors doesn’t help," he said in an exclusive interview with the South China Morning Post yesterday.

The veteran Beijing loyalist said that during the first few years of the handover, state leaders repeatedly expressed confidence in Hongkongers being capable of running the city effectively.

“But they gradually realised things did not turn out as they previously wished. They may have underestimated the difficulties, perhaps being too simple and sometimes naive," Tsang said, noting that as the Hong Kong government was unable to govern effectively, Beijing officials had been commenting on the city’s internal affairs more frequently.

“It has unavoidably sparked a backlash among some people in Hong Kong," he said.

Tsang, who will retire when the Legco term ends in September, called on Beijing and political forces in the city to break the vicious circle. He said building trust between the central government and the pan-democrats was vital for breaking the deadlock.

“It will be the most important task of the next chief executive, who will lead Hong Kong into a very critical stage in the development of ‘one country, two systems’," Tsang said.

He said next year would witness the 20th anniversary of the handover, which meant 40 per cent of the 50-year lifespan of “one country, two systems" would have elapsed. If the central government sees Hong Kong to be more of a burden or liability than an asset to the country, then I don’t see any reason why the central government would still want to keep ‘two systems’ at all."

Tsang said the biggest regret in his eight-year tenure as Legco president was his failure to bring together the pan-democrats, who enjoy the support of more than half the voters in Hong Kong, and the central government.

“For ‘one country, two systems’ to work, we need dialogue between pan-democrats and the central [government] in order to build up mutual trust," he said. “I thought I could do it. After two terms, I must say very little progress towards that direction [has been made], and that’s something I find rather regrettable."

But Tsang said it was a good sign that Hong Kong and Macau Affairs Office director Wang Guangya called pan-democratic lawmakers “part of the establishment from the Basic Law perspective" in a recent interview with pro-Beijing magazine Bauhinia.

“Looking at problems we face in Hong Kong now and conflicts between Hong Kong people, we should first try to find out the internal factors giving rise to these conflicts."

Jasper Tsang says his successor ‘will do a better job’

Legislative Council president Jasper Tsang Yok-sing predicts that “things will work out fine" for Hong Kong and the legislature after his retirement, and that his successor “will do a better job".

The Beijing loyalist was speaking two months before the Legco polls, which mark an important shift for both the pan-democratic and pro-establishment camps.

Tsang and at least eight other veteran lawmakers will voluntarily make way for younger politicians. It is also the last showdown between the blocs before the poll for chief executive in March. Earlier this year, Feng Wei, deputy director of Beijing’s Hong Kong and Macau Affairs Office, said he was prepared for several young radicals winning Legco seats in the September polls.

Legco’s House Committee chairman, Andrew Leung Kwan-yuen, has been tipped to succeed Tsang in October. Commentators have questioned if the industrial representative is fit for the job.

Without naming Leung, Tsang said: “The next president would always do a better job than I because he or she has my experience … It would be very unwise of me to say that Legco will be worse without me. No, I think things will work out fine for Legco and for Hong Kong as well."

Tsang began his Legco career when he was elected by a 400-strong committee to the provisional legislature that operated for a year after the 1997 handover. He has been a directly elected lawmaker since 1998 and became Legco president in 2008.

Over the past four years Tsang was involved in several controversial decisions as he handled radical lawmakers’ filibustering attempts to derail government bills or proposals deemed unpopular.

On how Legco had changed since 2008, Tsang said : “Many people seem to think that Legco has sort of degraded in the last eight years into a farcical organisation. [But] many colleagues in Legco understand that the president … does not dictate how the whole council behaves."

He noted that the start of his tenure as president came a month after the radical Wong Yuk-man was elected lawmaker, which was when “a new kind of culture developed" in Legco.

“He is very clever [and came up with] lots of ingenious ways to challenge the rules … and many people believed that I simply did not have the ability to deal with this kind of situation," Tsang said.

“Now, eight years have passed, I am still here, I think that is some achievement." 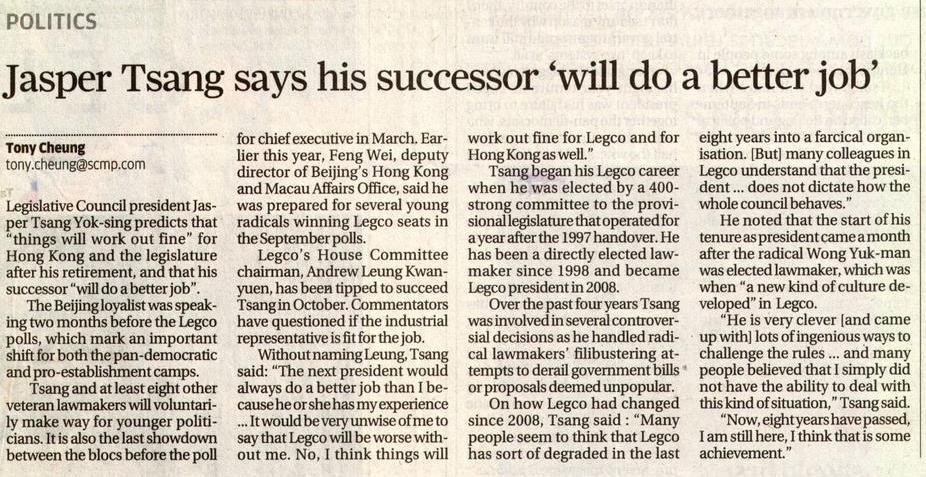