The central government may not introduce universal suffrage again in the near future if the opposition refuses to accept the constitutional reform package for 2017 Chief Executive election, says Legislative Council President Jasper Tsang Yok-sing.

The incumbent SAR government and even the nextterm one may not want to restart the electoral reform process. They will instead focus on economic development and people’s livelihood issues, Tsang told China Daily.

The central and SAR governments have reiterated that the current electoral system, under which a 1,200member Election Committee pickstheChiefExecutive,will remain in force if the reform proposal is rejected.

A two-thirds majority is essential to carry the reform proposals.

Passing the electoral package is good for Hong Kong, but he said he cannot see anyone from the opposition camp voting for it.

He hopes the central and SAR governments will maintaindialoguewiththeopposition even if the reforms are blocked.

“I will feel very disappointed if the reform is vetoed,” he told China Daily in an exclusive interview.

“If the reform is voted down,therewillbenowinner and we will all be losers. The ‘pan-democrats’ know that too.”

Tsang believes the moderate opposition lawmakers are scared to back the government proposals because they will be attacked by the radicals and dubbed “traitors of democracy”.

“The ‘pan-democrats’ also fear they will lose votes in coming elections. Various polls show that 20 to 40 percent of residents are opposed to the reform package and they know these people are their hardcore supporters.

As long as the proportional representation system is used for LegCo elections, votes gained by pro-establishment and opposition camps would remainsteady.Itisnoteasyto have an election result very different from previous ones.

He said the balance of power in LegCo might stay the same. The pro-establishment camp has more seats but not a two-thirds majority, while the opposition camp still maintains a critical minority and the power to veto. 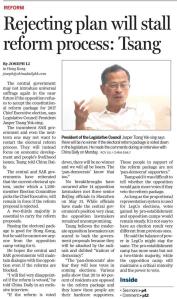